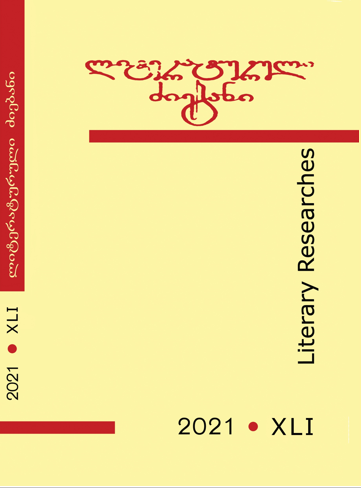 Artistic realism as a literary method was re-established in the Renaissance literature. It was based on aesthetic principles of the Late Middle Ages and antic period. The Renaissance was the epoch, when was rediscovered Classical Greek literary and philosophical ideal. As is well known, allegory plays an important part in the medieval literature of the West as well as the East. This takes origin from the antique period, when poetry and literature was as yet indivisible from the mythology and religion. In this regard, it is important that artistic realism was an alternative method of allegorical method of medieval allegorical poetry.

As is well known, ,,sweet new style” is the name given to a literary movement in 13th and 14th century in Italy. Influenced by the Sicilian School and Tuscan poetry, its main theme is Love, or Divine Love. The name ,,sweet new style” was used for the first time by Dante Alighieri in Purgatory, the second canticle of the ,,Divine Comedy”. In the ,,Divine Comedy” Purgatory he meets Bonagiunta Orbicciani, a 13th century Italian poet, who tells Dante that Dante himself, Guido Guinizelli and Guido Cavalcanti had been able to create a new genre: a new style. Poetry from this school is marked by adoration of the human form, incorporating vivid descriptions of female beauty and frequently comparing the desired woman to a creature from paradise. Also, the woman is described as an ,,angel” or as a ,,bridge to God”.

Dante Alighieri, as he was a follower of Guido Guinizelli, presented aesthetic standards of ,,sweet new style” in his works, poems (sonnets, canzonas, etc.) and an epic poem. Dante researched aesthetic parameters of poetry and worldview issues of literature. He dedicated to this numerous theoretical works, for example ,,The Convivio”/ ,,The Banquet”. The result of his theoretical researches was his conclusion that the Italian language is more relevant to poetry than Latin. Dante Alighieri was faithful to this principle and also, he was faithful to the basic principles of ,,sweet new style”. That’s why his poems (sonnets, canzonas, etc.) were written in italian, as well as his masterpiece – ,,Divine Comedy”.

Dante’s artistic realism as a literary method was borrowed from great authors of antic period. Dante was influenced especially by Virgil. The method of realistic description of events and things in ,,Divine Comedy” was borrowed from Virgil and as it is shown in ,,Divine Comedy”, Virgil was Dante’s guide through the Hell and Purgatory – it symbolically expresses that Dante
was influenced by him.

Most read articles by the same author(s)